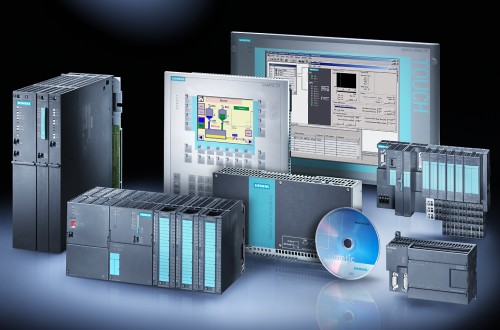 The Automation Division offers turnkey integrated Industrial Automation Solutions starting from the plant floor (PLC/HMI, SCADA) and continuing up to the Manufacturing Information Systems (MIS). This helps us enable our clients in optimizing their process in return achieving the highest level of efficiency by maximizing system availability and minimizing system downtime, at the same time maintaining upper level supervision and real-time monitoring offering the followings.,

A programmable logic controller or programmable controller is an industrial digital computer which has been adapted for the control of manufacturing processes, such as assembly lines, or robotic devices, or any activity that requires high reliability, ease of programming and process fault diagnosis.

They can be designed for many arrangements of digital and analog I/O, extended temperature ranges, immunity to electrical noise, and resistance to vibration and impact. Programs to control machine operation are typically stored in battery-backed-up or non-volatile memory.

PLCs were first developed in the automobile manufacturing industry to provide flexible, rugged and easily programmable controllers to replace hard-wired relay logic systems. Since then, they have been widely adopted as high-reliability automation controllers suitable for harsh environments.

A PLC is an example of a “hard” real-time system since output results must be produced in response to input conditions within a limited time, otherwise unintended operation will result.